Skip to content
You are here:Homekeigo The Easiest Guide To Understanding Keigo for Beginners 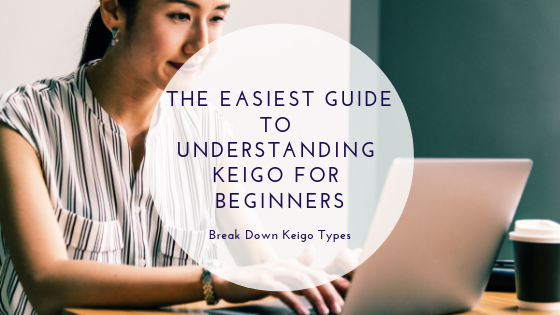 This is a guide for people who have been learning Japanese for sometime. You’ve got the basics done, you can make conversation with fellow Japanese speakers, but can’t seem to be taken seriously in business situations. Here is the solution how you can start upping your Japanese formal Keigo level!

Let’s look into how we can break down the different dimensions of the mysteries of Japanese formal speaking also known as Keigo. There is a very wide range of things you can learn about Keigo, but let’s keep it simple for now.

First off, what is Keigo? Keigo is a formal form of Japanese often used in, you guessed it, formal situations. For example, in a business atmosphere, interacting with customers, and talking to people you respect. That’s pretty simple.

But why is there Keigo in Japanese anyway? Good question. In English, you don’t really have big differences between formal and casual ways of using the language. Sure, there’s the more formal way of saying certain things than our everyday colloquial word choices, but there aren’t much difference when it comes to sentence structure or grammar.

There is a clear distinction between the two. And, this reflects on the way you talk to them, the way your body language changes, and overall interaction with them.

There are actually different types of Keigo. And, they differ by who you use them towards, and their degrees of how formal they are are also different.

This is the lowest level of formality. You can use this with colleagues or org mates that you do know, and are familiar with, but you’re not as close with to call them your “bff” or your “family”.
By the way, “丁寧” means “proper” in Japanese.

This is the highest level of intensity on our Keigo chart. You can use this with customers, with speaking to someone in a higher position than you in the workplace, or even with a mentor.

This one isn’t really higher or lower than either one for the above types of Keigo. However, it’s often used together with Sonkei-go. This is because you will use Kenjo-go when speak about someone from the “inside” to someone on the “outside” as covered in the first part of our lesson.

Look at these sample scenario, so you can master the concept of Kenjo-go.
You are speaking with your manager about something that you are doing.

As you can see above, “You” are using “yatte orimasu” which is a form of kenjo-go to refer to what you are doing.

Let’s take a look at another scenario. You are speaking with your manager, and you are referring to their action.

Are you going to be heading out today?

In this case, you are asking “your boss/someone superior to you” whether they will do a certain thing, so you will have to use “されますか” which is a form of “sonkei-go”.

If you were referring to an action “You” are performing, let’s say you had to ask “Will I be going out today?” then you would say “私は、きょうは、外出いたしますか。(watashi wa kyou wa gaishutsu itashimasuka?)” As you can see you will use “いたしますか” which is a form of “Kenjo-go” instead.

Now, take a look at another scenario. You are speaking to a customer, and you are talking about your manager.

In this scenario, the customer is the person in the “outside”, and you and your manager are in the “inside”. You can see this in two parts of this conversation.
First part is that “You” refer to your manager simply as “Suzuki” rather than calling them with a “さん – san” or “様 – sama”.

But aren’t we supposed to humble ourselves down when speaking about our boss?
Yes, you are right.

But!
When speaking to someone in a higher position, or let’s say, someone from the “outside” like your customer, you will have lift the customer’s position higher than your manager.

As you can tell by the explanation above, “謙譲” (kenjo) means “humility” or “modesty” in Japanese.
That wasn’t so hard!

At the beginning, you start off by thinking of a scenario or a real-life conversation you are having. Then, think of how you would break it down into the types of hierarchy and Keigo!
Now, you’re one step closer to becoming a Japanese keigo speaker!
What did you think? It may be confusing at the start, but once you get the hang of it, you’ll be speaking at par with a native speaker.

Remember, even native speakers get confused on how to use proper Keigo, imagine what your boss would say when you start upping your Keigo skills.

Good luck, and see you at our next lesson!